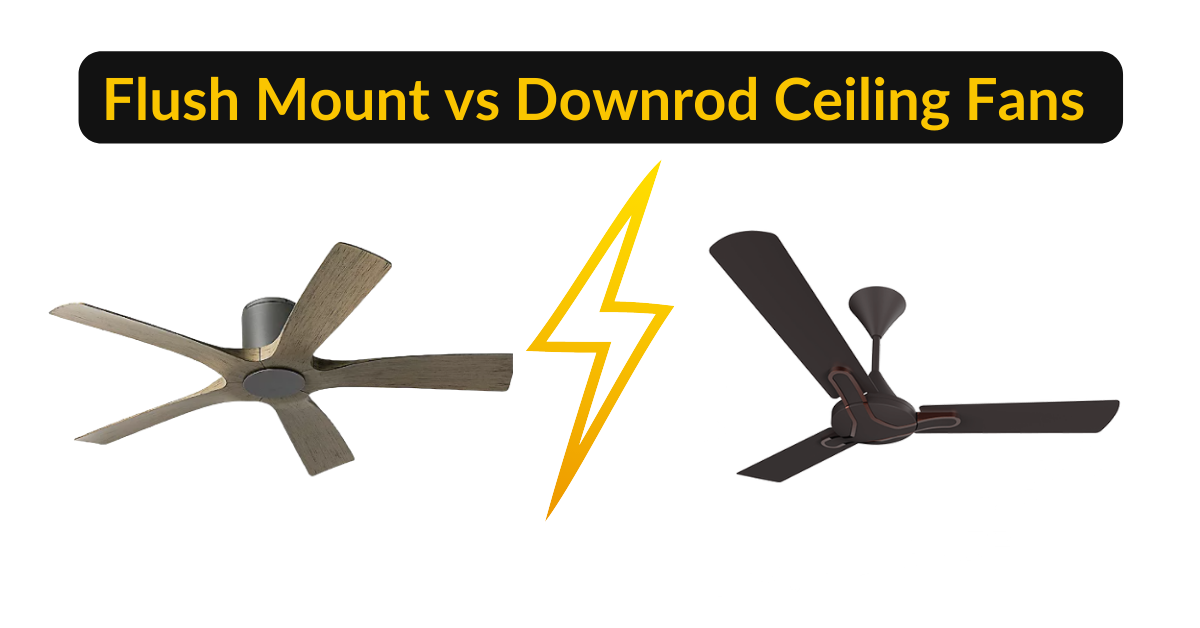 Have you ever got confused about choosing between a flush mount fan or a downrod ceiling fan for your room? If your answer is yes, then keep reading because we are going to help you choose the best option for you.

On the other hand, if your ceiling is high, then downrod ceiling fan is the best option for your room. You need a long downrod for your ceiling as it provides an effective flow of air when dropped further down from the ceiling. The blades of the ceiling fans should always be dropped 7 ft away from the floor, but if you install a flush mount ceiling fan for a high ceiling then you would end up getting low amount of air as the fan is way further from the floor. Thus, it is suggested to use a downrod ceiling fan for your high ceiling room.

Which Type of Ceiling is Best for Flush Mount and Downrod Ceiling Fans?

Whereas, a downrod requires a standard type of ceiling. If you have an 8 ft ceiling, install a short downrod ceiling fan on your standard ceiling instead of installing a flush mount ceiling fan. Not only will it stay 7 ft above the ground, but will also provide a good flow of air.

Which One is More Affordable?

Now, since the downrod ceiling fans have better designs, they are more expensive on average. So, flush mount ceiling fans wins this round. However, you can still find some attractive options that fit your room in an affordable price without worrying about a flush mount fan being close to the ceiling.

Which One Makes More Noise?

Although, downrod ceiling fans are more expensive but they are also less noisy when turned on. Since the downrod fans are quite far from the user, they also have enough space between the blades of the fan and the ceiling, they operate much quieter.

Whereas, flush mount ceiling fans are mostly too close to smoothly flow across the blades. Manufacturers catch up on this by employing a less costly and fewer powerful motor to stop the air from bouncing through blades, which ends up in noisy motors. Manufacturers also use more powerful motors that can cause the air to bounce around the blades leading to more noise. Thus, downrod fans win this round.

Which One Consumes More Power?

Most residential ceiling fans don’t consume tons of power, which is why they’re such great options to keep your room cool during the summer. Also, the units with light generally use energy-efficient LED lighting with a brighter output and a longer lifespan than regular light bulbs. The amount of power consumed depends on the model you buy. Thus, this one may be a draw.

Which One Has Better Features?

Both fans have a variety of features including the capability to customize lighting and using a remote control to manage the speed and light. Both options are available with a reversible motor to vary the direction from downdraft summer mode to updraft winter mode. Both types have various speeds, counting on your mode.

Which One is More Convenient?

Which One is More Maintainable?

What is the Main Difference Between Flush Mount vs Downrod Ceiling Fan?

There are various advantages and disadvantages to each option that you must check out before choosing your ceiling fan type. These involve:

One of the best advantages of a flush mount ceiling fan is that you do not require a downrod which removes one complicated step during the installation process. This also means there’ll be less of a chance for tall people to bump their heads on the ceiling fan.

On the other hand, downrod ceiling fan provides the simplest performance available thanks to the airflow above the unit.

Since there’s space. They’re further faraway from the ground and therefore the motor doesn’t go to work as hard to move the blades. Additionally, they’re much easier to put into a sloped ceiling than flush mount fans.

One of the biggest disadvantages of a flush mount ceiling fan is the noise level. Since the blades are closer to the ceiling, they need to work harder to force air down. Thus, increasing motor usage. Also, many of the lightings aren’t as attractive as the other ceiling fans due to the limited space.

One of the biggest disadvantages of installing a downrod fan is that it is hard to wash and perform simple maintenance like changing a blub. Also, if you don’t measure the downrod length correctly, it might be much too short, therefore impeding airflow, or much too long, causing tall people to hit their heads.

Q1. Which type of ceiling is best for flush mount and downrod ceiling fans?

Q2. Which one is more affordable?

Q3. Which one makes more noise?

Q4. Which one consumes more power?

The amount of power consumed depends on the model of the fan, so this may be a draw.

Q6. Which is better flush mount or downrod?

Flush mount and downrod are two different types of installation methods for ceiling fans. Whether one is better than the other depends on the specific situation and personal preference.

Q7. Is it better to flush mount a ceiling fan?

Flush-mounting a ceiling fan can be a better option if you have a low ceiling or you want a more seamless look.

Q9. Should I use a downrod for ceiling fan?

Whether you should use a downrod for a ceiling fan depends on the height of your ceiling and your personal preference.